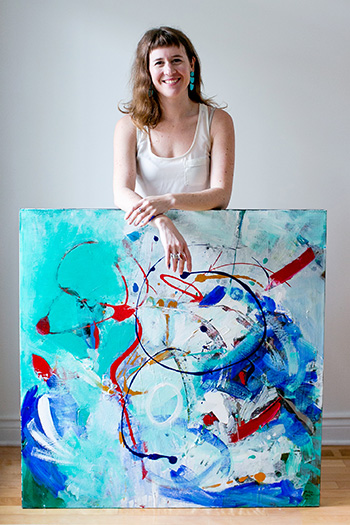 Biography
Karine Martineau is a Franco-Canadian artist based in Montreal.
Her artist name, Madjin, is a nod to her middle name (Madjean) given to her by her father, which combines the names of her two grandmothers.
Her passion for drawing and painting developed from a very young age, and she has participated in numerous workshops and artist residencies, including a month-long artistic exchange at the Luxun Academy of Fine Arts, China.

A graduate of the école Supérieure des Beaux-arts de Nîmes, in France, in 2008 and from the école des arts visuels et médiatiques, Université du Québec à Montréal (UQAM), in 2010, she received the Charest-Wallot Printemps scholarship for her work Château D'ô, presented at the group exhibit Passage à Découverte, at the Galerie de l'UQAM, in 2011. She has exhibited her work in several cities in France (Montpellier, Castries, Gréoux-Les-Bains) and in Canada, notably at the Galerie Art Neuf in Montreal.
She has participated in several artistic events over the years, including the Foire internationale d'art contemporain in Paris (as the assistant to artist Krijn De Koning), the Biennale de Montréal, and McGill University's Francofête. Most recently, she led the creation of collective artwork with over than 70 participants at Montreal's Lambert-Closse primary school in October, 2019.

Approach
Madjin has drawn portraits from an early age, seeking to understand a person's uniqueness through their facial expressions.
She turned to abstract painting during her studies in fine arts and became interested in the diversity of colors and textures, moving around her canvases as she creates to renew their composition over time.
Madjin thrives on navigating between these two mediums of creation: figurative art brings a precious connection to the human soul, while the abstract offers her immense freedom and an avenue for the expression of her emotions.
The titles of her works are intended as a continuity of the creative process, like a kind of poetry or allegory.


Figurative Art
In her current projects, Madjin questions cultures, personal and life stories and uses realistic portraiture as a means of narration. She turns to relational art, where creation cannot be achieved without the active participation of the people she meets. The artwork becomes a pretext for an exchange, a transmission of knowledge and memory.

In these portraits, Madjin is particularly interested in the subject's gaze, which she works to make as expressive as possible, so that the viewer feels challenged and is compelled to know more about each person's experience.

Julie Bramond from McGill University writes, "In light of the conversations she has with her models, Madjin offers portraits that are truer than life, attempting to capture the souls of the viewer through the power of the gaze."


Abstract Art
Unlike her realistic portraits which require meticulousness, dexterity and control, Madjin paints her abstract canvases with the greatest spontaneity. Her creative process is instinctive. When she creates, Madjin allows herself to be influenced by the emotions of the moment. Her approach is gestural, rich in textures and movements. She likes to use the paint straight out of the jar, in a quick movement, like a liberating gesture. She works on the floor and paints several canvases at the same time, which allows her to concentrate on composition.

Madjin works mainly with a spatula, then integrates the roller, the brush and even her hands / fingers. In her paintings, she often adds dripping which allows fluidity and serves as a common thread with the rest of the composition. Her canvases come in bright colors, their surfaces fully covered with paint, or sometimes, more airy. Allowing the appearance of blank medium is recurrent in her paintings.

According to Madjin, the more the paint breathes, the more beautiful the composition. Its variations follow the artist's personal evolution. She practices abstract art because the possibilities are endless and the viewers can invent their own story, letting themselves be immersed in color, getting lost in forms and matter. She creates passionate, colorful, bright and inspiring artwork.

Recently, she has begun collecting and recovering old canvases gleaned from the streets of Montreal or from people's homes, giving them a second life. It is also a kind of conservation approach, deliberately leaving visible traces of the original painting. It thus allows a subtle dialogue between the reused canvas's past and the creation that evolves from one artist to another.